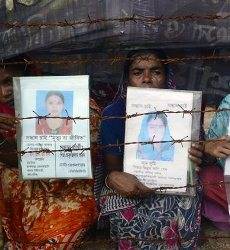 What once was her right arm is now just a stub lying limp next to her torso. She sits with a far-away look in her eyes and a sad smile. Morium Begum was working inside Rana Plaza when it collapsed, in what has been dubbed the deadliest garment factory accident in history.

"I was stuck in the rubble for three days," said the 30-year-old. "There were about 10 of us in one place. At first, no-one outside could hear us. We couldn't tell if it was night or day. I could feel the blood falling from my arm. It was already severed and hanging by the skin."

More than 1,000 people died, and a further 2,000 were injured, on April 24 in the Savar sub-district of Bangladesh's capital, Dhaka.

The scale of the accident prompted a massive rescue effort and tremendous media attention, but many questions remain about where the responsibility for such calamities lies, and if anything has really changed.

On Saturday, the Bangladesh Garment Manufacturers and Exporters Association (BGMEA) took part in a workshop ahead of a meeting with the North American Alliance for Bangladesh Workers Safety. The collaborated effort aims to create an Alliance Accord and a National Action Plan to come up with common standards to implement across all garment factories in Bangladesh. The workshop was attended by the Secretaries of Bangladesh's Ministries of Labor, Foreign Affairs, and Commerce, as well as an official from Alliance and the US ambassador to Bangladesh.

On that fateful morning, Begum says they were not supposed to be at work. The factory had been closed early the previous morning, but her supervisor ordered everyone to return the next day - threatening to withhold an entire month's wages.

"We informed our employees to leave the day before the collapse," says Shahidullah Azim, vice-president of BGMEA. "We told the factory management that the building was designated an abandoned factory and was meant to be vacated."

But factory managers and the building's owner, Sohel Rana, reportedly insisted the employees return to work. Rana is now in custody after trying to flee to neighboring India, but many fear he may try to use government connections to escape punishment.

Rana had ties with the Jubo League, the youth wing of the ruling Awami League party. The government, however, has distanced itself from Rana since his arrest.

Factory owners are often under a tremendous amount of pressure by foreign investors to deliver their products on time, said Azim.

Often shipments are delayed by general strikes or other unforeseen circumstances. Factory owners have to pay extra to transfer their goods from sea to air shipments, a costly alternative.

"We have to stay competitive," said Jahander Rashid, of Harun Garment Industries. "This is a buyer's market, not a seller's market, and if we don't keep our prices competitive and deliver on time, our factories will be empty."

Rashid says he was watching the news in the aftermath of the accident, and saw people holding protest signs in Canada saying:

"Don't buy Bangladeshi goods." But in a country with a four million-strong workforce in the garment industry, he says this is counterproductive.

Eighty percent of garment workers are women - and many of them are keeping families out of poverty.

Musammat Bulbuli lives in Bogra, about five hours north of the capital. She lost her 22-year-old daughter, Molita, in the Rana Plaza disaster. "I don't know what to do now," she said. "My daughter left behind two girls, aged five and two. She ran her household and took care of her family because her husband could only land odd jobs."

As Bangladesh's clothing industry has expanded over the past several decades, factories have moved from residential compounds to commercial areas. Many are in buildings shared with other businesses. Now efforts are being made to separate the factories into their own compounds, so they can be built according to specific needs and can be regulated better.

Azim of BGMEA says steps have been taken since the Rana Plaza disaster to regulate building facilities. In addition to fire safety, labor, and management cells, they now have 12 engineers on BGMEA's staff.

BGMEA is also encouraging factory owners to shift generators from building rooftops to the ground floor. Vibrations from the generators on the upper floors of Rana Plaza caused the walls to crack. The building was also only built for office space, and the upper floors were reportedly added without building permits.

BGMEA has also established a fire safety hotline for workers, and has begun a safety crash course for mid-level factory management and supervisors.

"We don't want donations, as they don't always reach the people who need it," says Azim. "We need minimum interest loans with long-term payback, so we can move factories to their own designated areas.

"We need to focus on ethical buying. We need to be able to negotiate better with foreign investors and stand down an offer if it doesn't meet our standards."

He explained that ethical buying consists of companies purchasing goods from places that have proper workers' rights in place, not just the cheapest labor to turn a maximum profit.

Bulbuli said that Bkash Limited, a subsidiary of BRAC Bank, paid for her daughter's burial - but the government only gave her around $260 as compensation. She comes to Enam Hospital in Savar, where most of the victims were taken after the accident, to look for assistance.

The chairman of Enam Medical College and Hospital, Dr Enamur Rahman, says the hospital gave treatment and food for free to the victims in the aftermath: "Our policy is treatment first, business later."

He says the government has told him it would reimburse his expenses - a cheque he has yet to receive.

Rahman says most of the victims had blunt injuries usually caused by impact, and about half of them had fractured limbs. Of the 26 amputees, nine of them were at his hospital.

One of those was Morium.

Morium now plans to return to her parents' house in Barisal. She says the government issued her compensation of around $15,000, to be given in $125 monthly installments.

But she says she can only retrieve the payments from the Sonali Bank in Savar, and can't access it from other branches around the country. That will require her to pay a round-trip train fare of around $20 each month to collect the money.

For now, however, she hopes to make the most of her situation; a situation that the international community can hopefully learn from - so as to avoid history repeating itself.