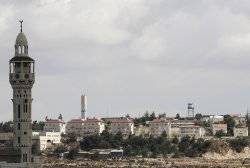 The Palestinian economy could expand by over a third if Israel were to lift its restrictions on about 60 percent of the West Bank that it controls, the World Bank said.

"More than half the land in the West Bank, much of it agricultural and resource rich, is inaccessible to Palestinians," the World Bank said in a report released on Tuesday.

"The first comprehensive study of the potential impact of this 'restricted land,' released by the World Bank today, sets the current loss to the Palestinian economy at about $3.4bn," it added.

If businesses and farms were allowed to develop in the territory, "this would add as much as 35 percent to the Palestinian GDP", it estimated.

Mariam Sherman, outgoing Country Director for the West Bank and Gaza, said the densely populated urban areas of the West Bank usually commanded the most attention.

"But unleashing the potential from that ‘restricted land’ - access to which is currently constrained by layers of restrictions - and allowing Palestinians to put these resources to work, would provide whole new areas of economic activity and set the economy on the path to sustainable growth."

The World Bank report comes about a fortnight after the Middle East Quartet published a plan to revive the ailing Palestinian economy, in an effort to support peace negotiations between Israel and the Palestinian Authority.

The three-year "Palestinian Economic Initiative" would focus on private sector growth. It identified eight key sectors targeted for development, including construction and building materials, agriculture, energy and water, and tourism.

The International Monetary Fund has estimated that the Palestinian GDP growth would slow from 11 percent in 2011 and 5.9 percent in 2012 to 4.5 percent by the end of this year.

Houses in the West Bank Jewish settlement of Psagot are seen behind a mosque (L) in Al-Bireh, next to the West Bank city of Ramallah October 6, 2013.