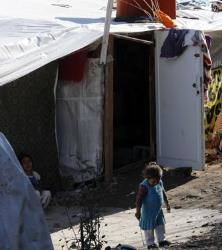 The UN says there are now more refugees than at any time since 1994. Thousands of asylum-seekers, mainly from Afghanistan and the Middle East, head to Indonesia each year to make the dangerous voyage across the Indian ocean to Australia.

They are seeking a new life, fleeing war, political unrest, and poverty.

The influx of asylum-seekers is a major political issue both in Indonesia and Australia, particularly as Indonesia has not signed up to the 1951 UN Refugee convention and does not have to accept refugees.

Australia, on the other hand, is a signatory.

The asylum-seekers pay thousands of dollars to people smugglers for a hazardous boat ride to Christmas Island.

EU member states make a distinction between asylum seekers and refugees, with asylum seekers defined as people submitting a request for refugee status.

The asylum seeker is not granted refugee status unless the member state decides they qualify, following a defined legal procedure.
More than 26 million people - 10.4 million refugees and 15.6 million IDPs - were receiving protection or assistance from UNHCR at the end of 2009. This is 1 million more people than in 2008.

By the end of 2009, UNHCR had identified up to 6.6 million stateless persons in 60 countries. However, the organization estimated that the overall number of stateless persons worldwide could be far higher - about 12 million people.

There are approximately 1.5 million recognized refugees living in the 27 member states of the EU plus Norway and Switzerland. This compares to a global figure of approximately 16 million.

Syrian refugees are seen near their makeshift tents in central Ankara October 20, 2013.