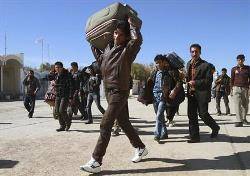 A new Human Rights Watch report has criticized the Iranian government for ill-treatment of Afghan migrants, including the detention and deportation of thousands of Afghans each year.

The report, Unwelcome Guests: Iran's Violation of Afghan Refugee and Migrant Rights, released at a Kabul press conference last week, calls for action by both Kabul and Tehran to end the mistreatment of Afghan migrants in Iran. The country's deportation process currently does not offer migrants due process or the right to appeal.

Speaking at Kabul's Safi Landmark Hotel on Wednesday, Heather Barr, the senior Afghanistan researcher at Human Rights Watch, said the group has seen a "disturbing" upward trend in the number of young men who go to Iran in search of economic opportunity.

The Iranian embassy in Kabul and Afghanistan's refugee minister did not respond to repeated requests for comment.

For Afghans in the western province of Herat, which shares a border with Iran, the contents of the 124-page report confirm experiences many of them had in Iran.

As one of nine Afghan migrants whom local media reported were shot when crossing into Iran in May, 16-year-old Abdul Hamid never had the chance to see if Iran held greater opportunity.

"There was no warning - they just fired straight away," Abdul Hamid told Al Jazeera of the May 11 shooting by Iranian border authorities. Abdul Hamid, who was hit by a bullet in his abdomen, claimed the shooting actually left 72 migrants dead or injured, though Al Jazeera was unable to verify this claim.

More than seven months later, Abdul Hamid is still bedridden at the Ansar Refugee Camp, where his family cares for his wounds. "It was only a single bullet that brought him to this state," Bibi Gol, Abdul Hamid's mother, told Al Jazeera.

According to Human Rights Watch researchers, Abdul Hamid's story is not unique. Of the nearly 100 Afghans and their families interviewed by the rights group, one-third said they had been physically abused. Meanwhile, "almost all of the people we spoke to were insulted and verbally abused", said Ahmad Shuja, an Afghan research associate at Human Rights Watch.

Abdul Hamid's father said his son was fortunate to have an Afghan doctor who looked after him while being treated at a hospital in the eastern Iranian city of Zabol. Other Afghan migrants, however were not so lucky. Many spoke of a system of preferential treatment in Iranian hospitals, with migrants seen as a lower priority.

Like Abdul Hamid, 21-year-old Faiz Mohammad said it was Afghanistan's double-digit unemployment rate that led him to Iran.

Though he had been deported from Iran and Pakistan twice before, Faiz Mohammad found few economic prospects in his native Sar-e Pol province - where high-risk mining and agriculture dominate the economy.

When Faiz Mohammad's legs were broken after the Peugeot he and 10 others was traveling in flipped over, the 21-year-old said he had a firsthand look at discrimination in Iran's hospitals. "They wanted a lot of money, more than they knew I could afford, because I'm Afghan," Faiz Mohammad told Al Jazeera. Realizing he had few opportunities for treatment in Iran, Faiz Mohammad chose to return to Afghanistan.

He continues to feel the sting of the economic conditions that led him to Iran in the first place. "It will cost me more than 2,200 afghanis [$38] to get to my district, but how can I make money when I can't even move my legs? I have no choice but to concentrate on getting better," Faiz Mohammad told Al Jazeera.

As for Afghanistan, HRW said it should pressure Iran to abide by international agreements it has signed, thus ensuring that the estimated three million Afghan migrants in Iran receive the protection and due process afforded to them by international law.
Barr said in discussions with Afghan officials that she is often told "Afghanistan can't make demands of Iran. Afghanistan is weak and poor; Iran is a powerful nation." But she rejected this reasoning, saying Afghan officials can be the "best and most important" voice for Afghan migrants.

"What Afghanistan is asking for is not a favor or a hand-out." Instead, Barr said, Kabul is simply demanding that Iran act in accordance with international agreements it has already signed.