Pakistan and US: Hand-in-hand on drone deaths 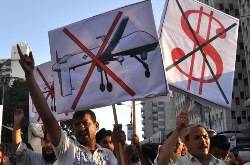 Pakistan's government and political parties are once again up in arms over the latest drone strikes by the US in tribal areas.
For years, Pakistani governments - both the quasi-military rule under former military ruler General Pervez Musharraf and civilian governments - have been condemning the strikes, calling upon US President Barack Obama to re-consider his drone policy vis-a-vis Pakistan.

However, beyond the rhetoric lies a security cooperation between Pakistan’s military and CIA that includes intelligence sharing for drone strikes. For instance, it has been widely reported that only in 2011 did the CIA vacate Pakistan's Shamsi airbase, which it used for drone operations.

And when a tribal based journalist Hayatullah exposed the military lies by showing pieces of missiles bearing US military insignia, he was abducted and later killed.

But years down the line, Pakistan's complicity with these strikes remained shrouded in secrecy - at least officially.
The first clear indication that Pakistani military is helping the US with drone strikes came from former Inter-Services Intelligence (ISI) chief, Director-General Ahmed Shuja Pasha, who told a 2012 commission investigating Osama bin Laden’s killing in Abbotabad that there was a verbal understanding between Pakistan and US over drone strikes.

Shuja said that the US drones "had their utility" and admitted that there was an "understanding" between Pakistan and the US on drone strikes inside Pakistan.

This followed President Musharraf’s interview to a US broadcaster during which he alluded to a secret agreement on drone strikes.
Musharraf said Pakistan, "Only on a few occasions, when a target was absolutely isolated and [there was] no chance of collateral damage...maybe two or three times only."

But how complicit are the Pakistani government and military in these strikes?

Earlier in 2010, WikiLeaks made public a 2008 cable by former US ambassador Ann Patterson who recalled her meeting with former Prime Minister Yousuf Raza Gilani in which the latter said on the issue of drone strikes, "...as long as they get the right people. We'll protest in the National Assembly and then ignore it," Gilani told Patterson.

But Shahzad Akber, the lawyer of drone victims claimed that there is a written agreement under which Pakistan has granted permission for drones to fly over the troubled Federally Administered Tribal Areas (FATA).

"Our understanding is that there is definitely a written agreement under which aerial space and a fly path is agreed," he told Al Jazeera.

But he said, even if Pakistani military has entered into an agreement with CIA over drone strikes, this agreement can never be legalized as it was never endorsed by the government of Pakistan.

"This agreement is similar to the thieves’ agreement which has no legal standing before any court of law," he said.
To date, none of the drone victims - nor their families - have received compensation for their suffering, despite the fact that millions of dollars have been earmarked for them.

Amnesty International, in a recent report on drones, claimed that a number of serving and retired Pakistani security officials familiar with intelligence cooperation between the two countries told the rights group that as security professionals, they supported the "targeted killing" program.

Some also claim that Pakistan’s military and intelligence services continue to assist the US in carrying out drone strikes. Amnesty International was unable to independently verify these claims, which were officially denied by representatives of the Pakistan armed forces. However, it remains unclear how the US would be able to carry out such strikes within Pakistan's border without the Pakistani governments explicit help and agreement.

Defense analyst and former military general Talat Masood said he would not be surprised to know if there is an agreement - even if only a tacit one. "I think Pakistan in the past had a dual policy.

"Now, because of mounting political pressure it - [the] military - is not even discussing the matter in private. In the past even Army Chief General Kayani had been telling his colleagues in the open that he has no problems with the US drone strikes. Even now the army is not saying anything about the drone strikes. It is always the government that reacts," he said.

Furthermore, in his new book, Magnificent Delusions, former Pakistani ambassador to the US Hussain Haqqani, who was involved in Pakistan-US strategic dialogue, disclosed that it was the Pakistani military that requested the killing of Tehrik-i-Taliban Pakistan leader Baitullah Mehsud in 2010.

His successor, Hakimullah Mehsud, was also killed in a recent drone attack.

Akber, who represents families of drone strike victims, disclosed that his investigations lead him to believe that drone strikes occurring before 2011 were based on intelligence provided by the Pakistani military.

One official at the foreign office disclosed that Prime Minister Nawaz Sharif was given a briefing in July 20 this year which included two written briefs saying that Pakistan’s response to the drones is dual.

"One brief stated that Pakistan’s response for public posturing is to keep condemning drone strikes and summoning US officials to record its protest to address the resentment while the other brief by the policy makers admitted that Pakistan and the US have an unwritten understanding on drone strikes," said the insider, on condition of anonymity.

The Pakistani government has also made a shocking claim in the Parliament last month disclosing that out of 317 drone strikes in the past five years only 67 innocent civilians have died in these attacks.

According to the official data, no innocent civilian was struck by the drone strikes since January 2012.

The official data negates the claims by human rights organizations that US drone strikes in Pakistan have mostly killed innocent civilians, including women and children.

The Ministry of Defense furnished a written reply in the Senate detailing the number of US drone strikes in the past five years.

According to the official data, this year, so far, has witnessed the lowest number of drone strikes which are 16 as compared to 2010 when the US hit Pakistan’s Federally Administered Tribal Areas around 100 times.

The UK-based Bureau of Investigative Journalism estimated that at least 300 civilians have been killed by drones in Pakistan since 2008, while the Washington-based New America Foundation put the figure at a more conservative 185 civilians. But estimates are starkly higher than the official Pakistani government's figure for civilians killed in drone US strikes.

Indeed, the official figures were shocking for even opposition parties. A leading opposition lawmaker Aitzaz Ahsan has said that these statistics if believed are actually making the case of holding drone strikes very strong.

The plight of civilian drone victims remains unaddressed as Pakistani government did not pay a single penny to the relatives of any drone victim.

"Some of the relatives of drone victims have gotten compensation only after lying to the military that their loved ones were killed in the cross fire between Pakistani military and the terrorists," Akber said.
In April this year a Pakistani High Court in Peshawar declared the drone strikes illegal and ordered the government to compensate the victims.

In its judgment Peshawar High Court directed the government to take measures to stop drone strikes which it said were violating Pakistan’s sovereignty and territorial integrity.

But six months on, no compensation has been given to any of the families of the drone victims despite a nationwide outrage by right-wing political parties, as people, in general, have stayed away from these protests.

So for now, the drone strikes persist, as do the deaths, with accountability, transparency and compensation still being out of reach for those who endure attacks on their own soil.

A protest against US drone attacks, in Pakistan