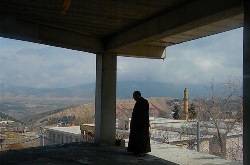 Holding her son's death certificate in one hand, Layla Awad explained that she had been provided with basic aid but struggles financially after the men in her family were killed in November.

"Both of my sons are dead but I have not been given their pension yet," she said.

Awad's two sons and husband were killed in an attack in Fallujah, in Iraq's Anbar province.

Awad fled her hometown three-weeks ago after a new surge in violence between the Iraqi military and anti-government forces in Anbar drove her, her daughter and son-in-law, out of western Iraq and into the Kurdistan region. At that time, Iraq's security forces cleared out a Sunni protest camp, sparking violence. About 300,000 people have fled Anbar in recent months.

During a year that has seen the worst levels of violence in Iraq since 2008, Prime Minister Nouri al-Maliki is expected “to win” the upcoming elections set for April 30 - a result that would likely prolong Anbar's troubles.

On Sunday, a suicide bomber set off an explosive-laden car on the main al-Houz bridge near Ramadi city, 115km west of the capital Baghdad, killing at least 20 people and wounding 29 others. More than 700 people were killed in violence throughout the country in February, according to UN figures.

Like other internally displaced (IDP) people from Anbar, Awad has settled in Shaqlawa, a popular holiday town northeast of Erbil, the capital of the Kurdistan region. Many of the fleeing Sunni Arabs cannot afford to pay rent in Erbil and have chosen the mountain city instead.

"The population in Shaqlawa has gone up by almost 50 percent," said Kaefi Nuri Ali, head of the city's fire department.

Ali and his staff have been providing Shaqlawa's 15,000 IDPs a space for aid-delivery operations and creating a database on them and their necessities.

Ali said local authorities are concerned over the coming high season and subsequent increases in rent. The displaced in Shaqlawa and other resort areas, such as the southern town of Dukan, are living in hotels and rented housing - and families with a limited income, such as Awad's, are likely to have to find alternative accommodation if rents spike.

"The rising cost of accommodation in Shaqlawa is a seasonal phenomenon. We draw the attention of authorities to it, as the primary responsibility for assistance for IDPs - including provision of adequate shelter - belongs to the government," said Natalia Prokopchuk, UNHCR's external relations officer.

Some families have already made the journey back to Anbar, forced to face the precarious security situation back home because of rising rents in Shaqlawa.

"Some IDPs cannot afford costs of staying in the Kurdistan region and therefore choose to move to other areas like Saladin province [north of Baghdad] where they can find cheaper accommodations," Prokopchuk said.

Prokopchuk said following a request by the Kurdistan Regional Government (KRG), the UNHCR refurbished areas for the displaced - including the still-empty Baharka site in Erbil governorate, where tents, electricity and sanitation facilities were installed, as well as sections of the Arbat Syrian refugee camp in Sulaymaniyah.

While a number of displaced have travelled to Iraqi Kurdistan with their savings, many have few resources and are faced with an uncertain future.

Displaced families risk finding themselves in a state of limbo in a region that is Iraq, but is not home. Despite long-standing animosity between the Kurds of Iraq and their Sunni counterparts, there was no sense of hostility in Shaqlawa.

"We've not had any problems, they are good people," said a young Kurd working in one of the local supermarkets, who asked to remain anonymous. "None of them have been begging for money and some come in asking for a job. But we can't take them on because they don't have a work permit or a sponsor."

Dindar Zebari, deputy chief of the Kurdish Department of Foreign Relations, told Al Jazeera the influx has had its affects on the region.

"The KRG is part of Iraq and as citizens of Iraq they are free to move," he said. "But it has been a burden on the economy, sometimes also a burden in terms of cheap labor.

They work for cheaper payment."

Running out of money

The Iraqi government provides 300,000 Iraqi dinars ($260) per displaced family, but that is not enough for the larger families.

A number of the displaced have found an alternative way of making money by selling aid material provided by the UNHCR, including mattresses, kitchen utensils, blankets and tents, according to Swedish NGO Qandil, which works with the United Nations.

The items are of little use in furnished hotel rooms and rented homes and instead provide money to pay for rent and food.

Kamil, 56, worked as a mechanic in Fallujah and arrived in Shaqlawa three months ago with his family of 11. He asked that his last name not be used for safety reasons.

"No one in my family works. I can't find a job without residency, but they only give us seven days. If we had a residency card, we would go to Erbil and find a job," said Kamil.

Ali Esawe, 61, a journalist from Fallujah, told Al Jazeera the displaced community is waiting for the violence to stop in Anbar so they can return home. Esawe said there's little interest among them to stay in Iraqi Kurdistan, despite the region's prosperous economy and stability relative to the rest of the country.

"We have got nothing here, we want to go back," said Kamil.