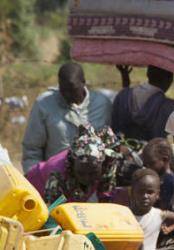 Almost seven million people in Sudan are in urgent need of aid after the influx of refugees from the conflicts in Darfur and South Sudan worsened the crisis in the African nation, the UN said.

The figure is a jump from the United Nations' previous estimate of 6.1 million, issued last year.

"The Sudan humanitarian response plan has been revised to reflect the deteriorating situation in Darfur, the influx of new refugees from South Sudan, and Sudan's acute malnutrition crisis," Ali Al-Za'tari, the UN's Sudan humanitarian coordinator, said in the statement.

Violence throughout Darfur reached its worst levels in a decade this year, displacing about 300,000 people from late February to mid-April.

The latest displacements bring to 2.2 million the number uprooted and living in camps in Darfur, where conflict began 11 years ago.

Adding to the humanitarian burden, more than 85,000 people have sought refuge over the border in Sudan since December when a power struggle between South Sudan's President Salva Kiir and his former deputy Riek Machar spiraled into brutal ethnic conflict that killed thousands.

There has also been "an increase in people suffering from acute malnutrition, especially children," after a comprehensive Sudan-wide survey, the UN said.

"Given these new needs, aid agencies in Sudan have reassessed their priorities and refocused primarily on the immediate delivery of life-saving assistance," it said.

"For example, the water and sanitation services for newly displaced people who have fled to Darfur's camps are now severely overstretched, giving rise to the spread of diseases such as jaundice and hepatitis E."

Elsewhere in the country, a three-year war in South Kordofan state and a smaller-scale conflict in Blue Nile have affected more than one million people.

Despite the humanitarian needs, aid agencies have faced obstacles to their work in Sudan.

The government has controlled the movement of aid groups in South Kordofan and Blue Nile.

Relief agencies have had no access into rebel areas from within Sudan since 2011.

From 17,000 staff working for international aid groups in Darfur in 2009, the number dropped to 6,850 at the end of last year, the UN has said. Most of those employees are Sudanese. The UN says it needs $995m in donor funds to help people this year.

While 45.5 percent of that money has been obtained, most of it is for food aid, and the UN says it is "very concerned" at the low funding for some life-saving sectors.

Only 10.3 percent of the $109m required for water, sanitation and hygiene assistance has been obtained, UN data show.

Refugees who fled the recent violence in South Sudan and crossed the border into Uganda carry their belongings as they await transportation from a transit center in the town of Koboko to a nearby settlement in Arua District, in northern Uganda.