More than 900 migrants were on 'ship genocide' 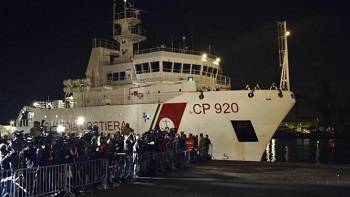 A Bangladeshi national rescued in the Mediterranean Sea from a capsized migrant boat off the Libyan coast on Sunday has claimed that there had been more than 900 people on board, Italian media reports.

According to Italy's La Repubblica newspaper, the Bangladeshi woman -- who is now hospitalized in in Catania, Sicily -- said that there had been between 40 to 50 children and 200 women on board the vessel.

Earlier media reports had put the number of people on the craft at around 700.

The Bangladeshi woman also said that passengers on the vessel were of several countries including Algeria, Egypt, Bangladesh, Somalia, Nigeria, Senegal, Mali, Zambia and Ghana.

She also said that people traffickers had locked many passengers in the hold of the doomed ship.

According to Italian Prime Minister Matteo Renzi the authorities have recovered 24 bodies and 28 people were rescued. He earlier reiterated his call for emergency action from European Union leaders.
EU foreign policy chief Federica Mogherini, speaking to European foreign ministers who gathered in Luxembourg on Monday, said that there is no "magic solution" to the migrant crisis in the Mediterranean.