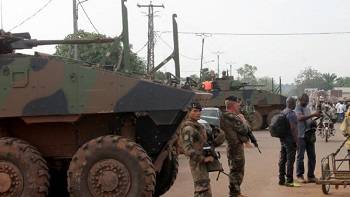 Some of the French soldiers alleged to have sexually abused children in Central African Republic while there on peacekeeping duties have been identified, a French judicial source said on Thursday.

The matter came to light this week when Britain's Guardian newspaper said it had acquired a U.N. report that raised allegations of the rape of young boys by French troops.

The source said an initial reading of that report suggested 14 soldiers were involved in the alleged abuse, which took place between December 2013 and June 2014. Subsequent French inquiries had identified some of them, the source said.

The Guardian reported that after receiving the confidential UN report entitled Sexual Abuse on Children by International Armed Forces, French authorities traveled to Bangui to investigate the allegations.

The source said an initial reading of that report suggested 14 soldiers were involved in the alleged abuse, which took place between December 2013 and June 2014

An officer representing the office of the high commissioner of human rights and a specialist from UNICEF interviewed the children between May and June last year. Some of the boys were able to give good descriptions of individual soldiers who abused them.

France’s Operation Sangaris in CAR began in December 2013. It is now being tied down as Paris hands over security to an 8,500-strong UN peacekeeping force deployed to control the conflict that has killed thousands.

French soldiers stand guard during a ceremony marking the power transfer between French Sangaris troops and Central African gendarmes on March 13, 2015 in the PK12 district in Bangui