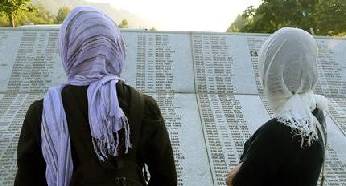 Tens of thousands of people have travelled to Srebrenica to attend a ceremony to mark the 20th anniversary of the genocide in the town.

More than 50,000 people, including 80 foreign dignitaries, were expected to include the event on Saturday that will include the funeral of recently found victims.

Last month, Naser Oric, the wartime Srebrenica commander of the Army of Bosnia and Herzegovina, was arrested in Switzerland on suspicion of war crimes on Serbia's request and later extradited to Bosnia.

Oric was earlier acquitted of war crimes charges by the International Criminal Tribunal for the former Yugoslavia (ICTY) in The Hague.

Diplomatic battles raged days ahead of the anniversary, with Russia vetoing the resolution on Srebrenica at the United Nations Security Council.

Moscow acted on the request of Serbia and Republika Srpska, the Serb-dominated part of Bosnia and Herzegovina.

In the Dayton peace accords that ended the Bosnian war, the county was split into two separately governed units or 'entities' - the Bosniak-Croat-dominated Federation of Bosnia and Herzegovina (FBIH) and the Serb-dominated Republika Srpska (RS).

The governments of Serbia and RS say the resolution would not have contributed to peace-building in the region.

They claim that a ''horrific crime'', not genocide, took place in Srebrenica, despite the rulings of ICTY and the International Court of Justice (ICJ) that the Army of Republika Srpska committed genocide in the town 20 years ago.
Funeral of newly found victims

Salih Mehmedovic was only 16 when he was killed in July 1995 in the genocide at Srebrenica, Bosnia and Herzegovina, together with another 8,371 Bosniak men and boys. His two brothers, Rifet, 18, and Fikret, 20, as well as their father Ismet, were also among the victims.

On Saturday, they will be buried together, alongside 132 other victims at the Srebrenica-Potocari Memorial Centre.

Eighteen minors will be among those buried, while the oldest victim is Jusuf Smajlovic, who was 75 when he was executed.

The sad column with the remains of 136 genocide victims arrived in Potocari on Thursday, where families of the dead received them silently, most of them in tears, knowing that many caskets contained only a few bones that were found in secondary mass graves.

This year, the identified remains of 134 people will not be buried because their families decided to wait until more bones were found to complete their bodies.

''They only found the legs of my younger son. They found the jaw of the elder one'', said Mejra Begovic through tears. Begovic lost her husband and three sons in the genocide.

''Due to the moving of bodies to various mass graves and the way the graves were hidden, it is most probable that we will never find all the remains'', Sadik Selimovi, an investigator with the Missing Persons Institute of Bosnia and Herzegovina, told Al Jazeera.

About 12,000 participants of the March of Peace also arrived in Potocari on Friday.

The march is held in memory of thousands of Srebrenica residents who walked more than 100km in July, 1995, to seek shelter in Tuzlain in Bosnia's north in what became known as the March of Death.

The March of Peace participants are walking the reverse route, with Potocari as their last stop.

Twenty years ago, between 12,000 and 15,000 men, and several hundred women, children and the elderly fled Srebrenica. Only 3,500 of them survived. The rest were killed in bombings, ambushes and minefields.

The survivors have testified to the horrors they endured while walking through forests and mountainous terrain for days, saying they were forced to eat leaves, passed bodies and hallucinated as poisonous gases were thrown at them.

This year, just like 20 years ago, Mirsad Sinanovic was to lead the march.

''The most difficult thing was to hear those cries. You couldn't sleep, you would think about everything. That's where I lost my brothers and my father. I was wounded three times,'' Sinanovic recalled.

From 2003 until last year, 6,166 Srebrenica genocide victims were buried at Potocari. After Saturday's burial, the remains of 440 children will lie at the Memorial Centre cemetery.

Bosnian women read the names of killed Bosnian Muslims at the Potocari Memorial Center during the burial of 136 newly-identified Bosnian Musliims killed by Bosnian Serb forces in Srebrenica 20 years ago, in Srebrenica, Bosnia and Herzegovina, 11 July 2015.