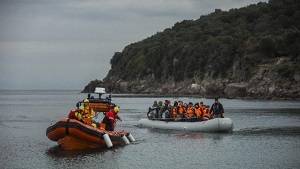 The year 2015 was the deadliest on record for refugees trying to reach Europe by sea, with 3,771 deaths recorded in the Mediterranean alone, the International Organization for Migration said on Tuesday.

The Mediterranean was followed by Southeast Asia, mostly in the Bay of Bengal, Andaman Sea, Malaysia and Thailand, which saw at least 800 deaths this year.

Within Mexico and along the U.S.-Mexico border there have been at least 330 deaths recorded this year, the organization's year-end summary noted.

"Globally, IOM estimates that over 5,350 migrants died in 2015. IOM also recorded total sea arrivals to Europe in 2015 at 1,004,356 or almost five times the previous year’s total of 219,000," the organization’s spokesman Joel Millman said at a press conference in Geneva.

According to the organization, nearly half the deaths at sea were refugees from Syria, with 21 percent others coming from Afghanistan.

Some 3,279 refugee deaths were recorded in the Mediterranean in 2014.

Spanish volunteers tow a dinghy with refugees and migrants onboard in an effort to assist them to end safely their journey from a Turkey coast to the Greek island of Lesbos, Saturday, Jan. 2, 2016.