How Mossad carries out assassinations 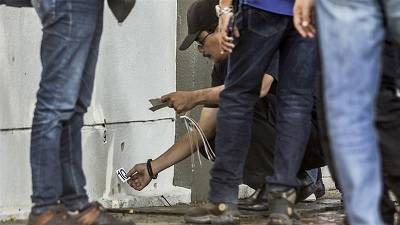 The killing of 35-year-old Palestinian scientist Fadi al-Batsh in the Malaysian capital Kuala Lumpur has taken the wraps off a covert programme of targeted killings of Palestinians deemed a threat by Israel.

Al-Batsh studied electrical engineering in Gaza before going on to earn a PhD in the same subject in Malaysia.

He specialized in power systems and energy saving and had published a number scientific papers on the subject.

Gaza's ruling Hamas said al-Batsh was an important member of the group and accused Israel's Mossad intelligence agency of being behind Saturday's incident.

Calling him a "loyal" member, Hamas said al-Batsh was a "scientist of Palestine's youth scholars" who made "important contributions" and participated in international forums in the field of energy.

Speaking to Al Jazeera, al-Batsh's father said he suspected Mossad of being behind his son's killing and appealed to Malaysian authorities to unravel the "assassination" plot as soon as possible.

According to the Israeli investigative journalist Ronen Bergman, who is one of the foremost experts on Israeli intelligence and author of the book Rise and Kill First, the murder of al-Batsh bears all the hallmarks of a Mossad operation.

"The fact that the killers used a motorcycle to kill their target, which has been used in many other Mossad operations before and being done as a clean, professional killing operation far away from Israel, points to Mossad's involvement," Bergman told A Jazeera by phone.

Sometimes the target is identified by other Israeli domestic and military services.

For example, al-Batsh could have been identified as a target through general collection of intelligence via units inside Israeli military and intelligence organizations that follow Hamas.

Al-Batsh could also have been identified through other Israeli intelligence operations and Israeli spy networks around the world.

Sources tell Al Jazeera that Hamas communications between Gaza, Istanbul (Turkey) and Beirut (Lebanon) are tightly monitored by Israeli intelligence networks. As such, the initial selection of al-Batsh could well have been made through these channels.

Friends of al-Batsh who spoke to Al Jazeera on condition of anonymity said he did not hide his ties to Hamas.

"He was known within the Palestinian community for his ties to Hamas," one friend said.

Once al-Batsh was identified as a target, Mossad would then have evaluated available intelligence to decide whether he should be killed, what the benefits of killing him were and the best way to do it.

Once the Mossad's specialised unit finishes its file on the target, it takes its findings to the heads of Intelligences Services Committee, which comprises the chiefs of Israeli intelligence organizations and is known by its Hebrew acronym, VARASH, or Vaadan Rashei Ha-sherutim.

VARASH would only discuss the operation and provide input and suggestions.

However, it does not have the legal authority to approve an operation.

Only the prime minister of Israel has the authority to approve such an operation.

Bergman says that Israeli prime ministers typically prefer not to take that decision by themselves for political reasons.

"Oftentimes the prime minister would involve one or two other ministers in the decision to approve, which oftentimes includes the minister of defense," Bergman said.

Once the approval is obtained, the operation then moves back to Mossad for planning and execution, which could take weeks, months or even years, depending on the target.

Caesarea is an undercover operational branch within Mossad in charge of planting and running spies mainly inside Arab countries and around the world.

The unit was established in the early 1970s, and one of its founders was a famous Israeli, spy Mike Harari.

Caesarea utilizes its vast spy network in Arab states and the wider Middle East to collect information and conduct surveillance against current and future targets.

Harari then established Caesarea's most lethal unit, known in Hebrew as Kidon ("the bayonet"), made up of professional killers specialized in assassination and sabotage operations.

Kidon members are often drawn from Israeli military branches including the army or special forces.

Mossad targeted not only Palestinian leaders and operatives but also Syrian, Lebanese, Iranian and European ones.

The CIA conducts its top-secret paramilitary missions - including targeted killing operations - through its Special Operation Group ( SOG), which is part of the SAC and bears some similarities to Mossad's Kidon.

Bergman writes that, until 2000, which marked the beginning of the second Intifada in the occupied Palestinian territories, Israel had conducted more than 500 assassination operations that resulted in the deaths of more than 1,000 people, including the targets and bystanders.

During the Second Intifada, Israel conducted 1,000 more operations, of which 168 succeeded, he writes in his book.

Since then, Israel has carried out at least another 800 operations aimed at killing Hamas civilian and military leaders in the Gaza Strip and abroad.

More recently, and in light of shifting alliances in the region and rising threats from armed non-state actors, Mossad has expanded its links with Arab intelligence agencies to include a number of Arab Gulf states and Egypt.

Mossad maintains a regional hub for its operations in the wider Middle East in the Jordanian capital Amman.

When Mossad attempted to assassinate Hamas leader Khaled Meshaal in Amman in 1997 by spraying a lethal dose of poison into his ear, it was a threat by the late King Hussein to close down the spy agency's Amman station and sever Jordanian-Mossad ties that prompted Israel to provide the antidote that saved Mashaal's life.

In his book, Bergman cites Mossad sources to claim that General Samih Batikhi, Jordan's spy chief at the time, was angry with Mossad for not keeping him informed about the assassination plot because he had wanted to plan the operation together.

Another Arab country that maintains strong ties to Mossad since the 1960s is Morocco, according to Bergman's research.

"Morocco has received valuable intelligence and technical assistance from Israel, and, in exchange, [late King] Hassan allowed Morocco's Jews to emigrate to Israel, and Mossad received the right to establish a permanent station in the capital Rabat, from which it could spy on Arab countries," Bergman writes.

The cooperation reached a peak when Morocco allowed Mossad to bug the meeting rooms and private chambers of Arab heads of states and their military commanders during the Arab League summit in Rabat in 1965.

The summit had been convened to establish a joint Arab military command.

Unlike Mossad and other Israeli intelligence organizations that have great leeway in deciding who to kill, the American CIA uses a strenuous multi-tier legal process that involves the CIA's Office of General Counsel, the US Department of Justice and the White House's Office of Legal Counsel.

The execution of a targeted killing operation by the CIA ultimately rests on a Presidential Finding Authorization, which is a legal document often drafted by the CIA's Office of General Counsel and the Department of Justice.

The President Finding Authorization provides the legal authority through which the CIA can execute its targeted assassination missions.

A multi-agency review process, conducted mainly by lawyers at the justice department, the White House and the CIA, has to take place before the president puts his signature on the Presidential Finding Authorization.

It is estimated that Barack Obama, as the US president, authorized an estimated 353 targeted killing operations, mainly in the form of drone strikes.

A former senior CIA official told Al Jazeera on the condition of anonymity that "the CIA does not decide who to kill".

"The legal process makes it very difficult for the CIA to kill someone just because the CIA thinks he is a bad guy," he said.

Most of the CIA's targeted killing operations involve drone strikes and are based on authorisation by the president.

Speaking to Al Jazeera, Robert Baer, a former CIA operations officer, said: "The White House must sign off on any targeted killing operation, especially if it is a high-value target.

"It is a different case, however, if the operation is conducted in battlefields or during wars like in Afghanistan or Iraq, in which case field officers have more legal room to do their targeted killing."

In Mossad, the legality of any assassination of any target is much more liberal and does not involve legal constraints similar to those followed by the CIA, according to sources familiar with the process.