Half of Syrian population 'will need aid by end of year' 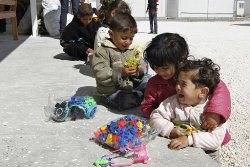 More than half the population of Syria is likely to be in need of aid by the end of the year, the UN high commissioner for refugees has warned, while labeling the ever-worsening crisis as the most serious the global body has dealt with.

António Guterres, who has led the UNHCR through the worst of the refugee crises in Afghanistan and Iraq, said the Syrian war was more brutal and destructive than both and was already the worst humanitarian disaster since the end of the cold war.

His assessment came as the UN released new data on the numbers of refugees, which revealed that 6.8 million Syrians need aid. That figure is likely to reach at least 10 million, more than half the pre-war population of the country.

Another UN body, Unicef, says half of those in need are children.

"I don't remember any other crisis where we are having 8,000 per day [fleeing across borders], every day since February," Guterres said in an interview with the Guardian. "There will very likely be 3.5 million by the end of the year. We will have half the population of Syria in dire need of assistance and this is incomprehensible."

With the war now into its third year and increasingly taking the shape of a proxy regional war fought across a sectarian faultline, aid groups are making ever more strident predictions of a catastrophic funding shortfall.

UNHCR figures show that close to 1.3 million Syrians have fled the country in the past two years. The figure is markedly lower than the numbers that have left Iraq and Afghanistan over the past decade, but is increasing at a faster rate than at any point in either country.

In addition, there are thought to be at least 3 million internally displaced Syrian refugees, many of whom have limited means to provide for themselves or their families. Communities in Syria's war-ravaged north, west and south are largely without electricity and low on food and running water.

Refugee camps in northern Jordan, southern Turkey and Lebanon's Bekaa valley are overwhelmed with daily arrivals of refugees who have often made precarious journeys to escape nearby battlefields.

"This is the most brutal [conflict], even with very brutal conflicts elsewhere," said Guterres. "If one looks at the impact on the population, or the percentage of the total population in need, I have no doubt that since the end of the cold war it is the worst. And it will become even worse still if there is no solution.

Lebanon and Iraq are increasingly unable to deal with the Syrian spillover, which is disturbing already fraught sectarian power bases and straining meager resources during an economic downturn brought on by the crisis.

In an address to the United Nations security council on Thursday, Guterres said there had "not been an inch of progress towards a political solution".

Expanding on that to the Guardian, he said: "It is of enormous frustration that we have come to such a situation in global governance that nobody can address it."

Diplomacy on Syria has failed to bridge a yawning divide in views on what has fuelled the crisis and how best to deal with it. Russia and China, two permanent members of the security council, have blocked moves towards more robust support of the opposition in Syria.

UN appeals for aid to Syria remain desperately under-funded with some agencies, including Unicef, reporting a shortfall of more than 70%. The crisis was eased somewhat on Thursday when Kuwait transferred $300m (£196m) to the UN for Syrian relief. "[It] will be distributed across all of our institutions," said Guterres.

"We can now put some money up front in Syria, but we are all in big trouble. Most of the western countries have huge budget difficulties. Moving towards 3 million refugees, there is no way that this can be dealt with.

"The system is at breaking point. There is limited capacity to take many more. Where are the people going to flee? Into the sea?"

1.35m: the number of refugees fleeing Syria who have sought protection in neighboring countries, according to the UNHCR

48%: the percentage – at least – of the refugee population who are under 18. Some 77% are women and children

10%: the increase in Lebanon's population due to refugee movements. Jordan's is up 6%

Syrian refugees children play with toys given by Members of the UAE Red Crescent after their arrival at the new Mrajeeb Al Fhood refugee camp 20 km east of the city of Zarqa April 10, 2013.