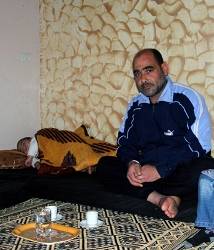 "Death was all over the place. Projectiles were not stopping … we miraculously fled the camp."

This is how Palestinian refugee Alaa Barakat described his last moments in Yarmouk refugee camp in Damascus in December 2012. Barakat lived in the camp with his wife and two children, a three-year-old and a five-month-old. The Yarmouk camp, which previously housed more than 160,000 Palestinian refugees, was bombarded by forces loyal to Syrian President Bashar al-Assad’s regime, and saw frequent armed confrontations between the Syrian army and armed opposition groups.

A regime-imposed siege on the camp has led to severe shortages of food, water and medicine, sparking a humanitarian crisis. Some 18,000 Palestinians, and some Syrian families, remain in the camp today.
Barakat and his children flew from Damascus to Cairo, and then moved to northern Sinai near the border with the Gaza Strip.

He paid $150 to enter Gaza through underground tunnels soon thereafter. The family arrived in Gaza with only the clothes on their backs. Barakat’s wife, Eman, a Syrian citizen, joined them in Gaza three months later after securing a permit from Syrian authorities.

"Nothing can describe the feeling of a person when they have to live the pain and suffering again. I started my life as a refugee child in a refugee camp in Syria; I come back today here in Gaza to live the harsh life of refugees once again with my children," Barakat said.

More than 250 families (up to 1,500 people) from Syria are now living in the Gaza Strip. Thirty-four percent of the refugee families are Syrian, and the remaining are Palestinian refugees who had been living in Syria, according to Ali al-Khatib, the head of Syrian Returnees Unit at the Ministry of Social Affairs in Gaza.

Dozens of these are university students who cannot continue their studies because of financial constraints and tuition costs in Gaza. On average, a semester at Gaza’s al-Azhar University costs $450.

Gaza is already home to 1.7 million Palestinians, more than half of whom are Palestinian refugees.

"UNRWA is fulfilling its role towards the refugee families. We provide them with food parcels, health and educational services, besides a sum of $125 as a rent allowance to secure shelter," UNRWA spokesperson Adnan Abu Hasna told Al Jazeera.

Suffering under a tight Egyptian-Israeli siege, people in Gaza rely heavily on underground tunnels between Gaza and Egypt for the movement of goods, construction supplies and even people. But since the ouster of former Egyptian President Mohamed Morsi, most of these tunnels have been destroyed.

Job opportunities are especially few for the new refugees from Syria. Atef al-Emawi, a Syrian refugee and the chairman of the Monitoring Committee for Syrian Refugees in Gaza, a group that liaises with different local government departments, told Al Jazeera that only 15 of the refugees have been able to get full-time jobs in Gaza.

"We do not want to be an extra burden on Gaza which has enough problems. We need real jobs to become productive in society," al-Emawi told Al Jazeera.

Palestinian Prime Minister Ismail Haniyeh, head of the Hamas government in Gaza, has promised to provide a job to one member of each family and a house for each family in Sheikh Hamad city, in southern Gaza; the houses are being built with funding from Qatar.

Al-Khatib told Al Jazeera that the government in Gaza has paid $60,000 in rent allowances for refugees from Syria who are living in Gaza. This amount has covered costs for 31 homes for 11 months.

Gaza Minister of Social Affairs Mohammed al-Riqib told Al Jazeera that the Hamas government does not distinguish between Palestinian and Syrian refugees. "The government in Gaza, despite the difficult conditions involved, has adopted comprehensive programs of support for refugees, and will continue to support them with all its available possibilities," al-Riqib said.

Abu Thaer al-Shami works full-time in a pastry shop in Khan Younis, making $20 per day [Khaled al-Ashkar/Al Jazeera]
"We as refugees in Gaza have to welcome and support them, especially because we have lived through the suffering of the refugee experience for many years." Overall, Palestinians in Gaza have welcomed the new arrivals. "Whether they are Palestinian or Syrian, they are refugees who left everything behind and fled death and war," Samir Ghonaim, 36, a resident of Rafah in southern Gaza, told Al Jazeera.

Abu Thaer al-Shami is a Syrian citizen who fled to Gaza when the Syrian uprising began in 2011. "We fled from the war and came to the blockade," he told Al Jazeera, explaining that he has lost contact with his mother, brothers and other relatives who stayed back in Syria.

Al-Shami made sweets and desserts in Yarmouk refugee camp for 10 years. In Gaza, he found a job at a pastry shop in the southern city of Khan Younis, where he continues to work full-time, earning $20 per day.

"Despite the good reception that the people of Gaza are giving me, I can't cope with the fact that I escaped from home and become a refugee," al-Shami said. "I eagerly await the moment I can return to my homeland and family in Syria."